This blogpost takes stroke care as an example to demonstrate the differences observed in health outcomes and resource distribution, 1-year post-stroke. This example is based on data from Sweden, categorized by region. The data is depicted in both Figures 1 and 2 below which were re-created manually by extracting data from the Sveus 2015 report (1). If you missed any of the prior blog posts in this series, they are available here.

Figure 1 shows deviations in health outcomes (survival, recurrent stroke, full-time workability, good functioning, and good general health) of patients in Sweden, 1-year post-stroke. The shaded dots refer to results that are statistically significant. Each dot represents the average performance per region, compared to the average value in other regions (except the region of interest). Note that an odds ratio has been reported to represent for binominal variables. The results show a variety in the distribution of health outcomes in Sweden. Considering the possible variations within a country, how would health outcomes be compared when conducting a transferability assessment between different countries in Europe? How would this be considered when the comparison is between continents or populations? 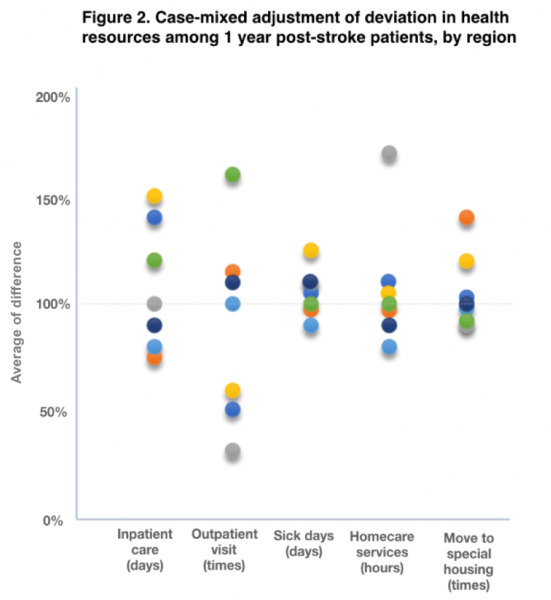 By understanding Sweden’s domestic data, the variations in 1-year post-stroke health outcomes and care resource distribution show that the results from certain interventions must be considered based on the original characteristics of the settings themselves. This is because if such wide distributions exist in just one country, how would the differences be when compared between multiple countries?